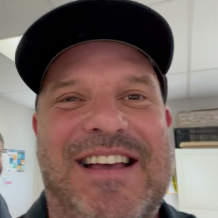 According to the lawsuit, Chad Everett Harris, Ashton Harris, and Whinstone US started a bitcoin mining operation in Louisiana with a $5.8 MM initial deposit provided by GMO Internet Group to cover construction costs and to provide working capital.   Whinstone made commitments to obtain the loan and failed to deliver on their commitments.  They went live with 385 machines as opposed to the 66,693 machines they committed to.  They even failed to secure a reliable source of energy.  They then moved to Texas.

We don’t understand why Aroosh Thillainathan who has used the Whinstone name since 2014 would incorporate in America as founder of Whinstone US with Chad Everett Harris as the CEO.

Chad Harris ruined his small gardening company while burning quite a few people and companies including Whitney Bank.  The only company he’s owned, according to public records, was the gardening company under different aliases.

He has no CEO experience but he was listed as CEO of Whinstone.  People are trained to be CEO’s — you don’t just become one with no previous experience.  Here’s a breakdown of what’s expected of a CEO.  Here’s another with the education requirements listed.

We don’t understand why Aroosh Thillainathan would put a guy like this in charge of his new American start-up?

We don’t understand why Riot would pay $80MM in cash plus 11.8 MM shares of Riot Blockchain common stock (valued at $571MM) for Whinstone US when due diligence would have revealed that the only reason Whinstone was able to stay in business was because GMO Internet lent Whinstone $33.6MM and allowed Winstone to use GMO equipment (see section C – Texas Agreement)

We don’t understand why Riot would place a strategic officer, Benjamin Yi, in the Cayman Islands.

The lawsuit appears to reveal some of the truth behind the marketing, hype and hype.  You can download the full lawsuit doc below.

Some bits from the filing:

When that project fell apart, Whinstone pursued development of a data center project in Rockdale, but again failed to raise the necessary funds. To proceed with the Rockdale project, Whinstone desperately needed to secure GMO as a customer at that facility. So, as an incentive to (1) deferring payment of the millions of dollars it already owed GMO, (2) secure a contract with GMO and (3) convince GMO to loan it additional money to fund construction costs, Whinstone offered GMO favorable terms for a new colocation arrangement at the Rockdale data center.

Over the course of 2020 and into 2021, GMO pushed Whinstone to repay the amounts owed, but Whinstone engaged in a pattern of delays.

For instance, despite Whinstone’s obligation to begin operations within 20 weeks of the construction start date, see Texas Agreement at 2.1, the center did not reach 5MW operations until June 2, 2020, much later than expected. This was largely due to project mismanagement and lack of budget control resulting in significant delays in (1) the construction of the data center building, switch stations, sub-stations and electrical facilities, and (2) putting the power supply schedule in place.

all discussions came to a halt when Riot acquired Whinstone in May 2021. Indeed, the now Riot-controlled Whinstone never again made any proposal concerning its indemnity obligations and instead-only after dozens of requests over many months-proposed in bad faith a wholly unacceptable longer-term agreement with terms vastly disadvantageous to GMO.

Whinstone is liable for, inter alia, GMO’s loss of revenue, loss of profit, and loss of savings stemming from any breach. GMO’S losses attributable to these additional breaches exceed $50 million.

Whinstone also recently invoiced GMO for an increase in power price from $0.0285/kWh to $0.03/kWh … ostensibly because the power price to be paid by Whinstone to its provider, TXU Energy, is set to increase. However, the 2019 Texas Agreement provides that the power price of $0.0285 USD/kWh “shall not be increased for 10 years”.

On or about March 29, 2022, Whinstone improperly removed certain of GMO’s mining machines in breach of its obligations under … Due to Whinstone/Riot’s removal of GMO’s machines, GMO suffered a decrease of an estimated 20 petahashes in mining capacity, which amounts to at least $16,000 a day in profits. While GMO demanded that the equipment be returned/replaced and send a formal notice related to such on April 12, 2022, it did not receive any response. And upon visiting the Rockdale data center on May 7, 2022, GMO personnel discovered that its machines had not been placed back in service but had instead been replaced by Whinstone machines operating for Whinstone’s own benefit. Despite multiple demands that the GMO machines be put back in position, Whinstone refused. 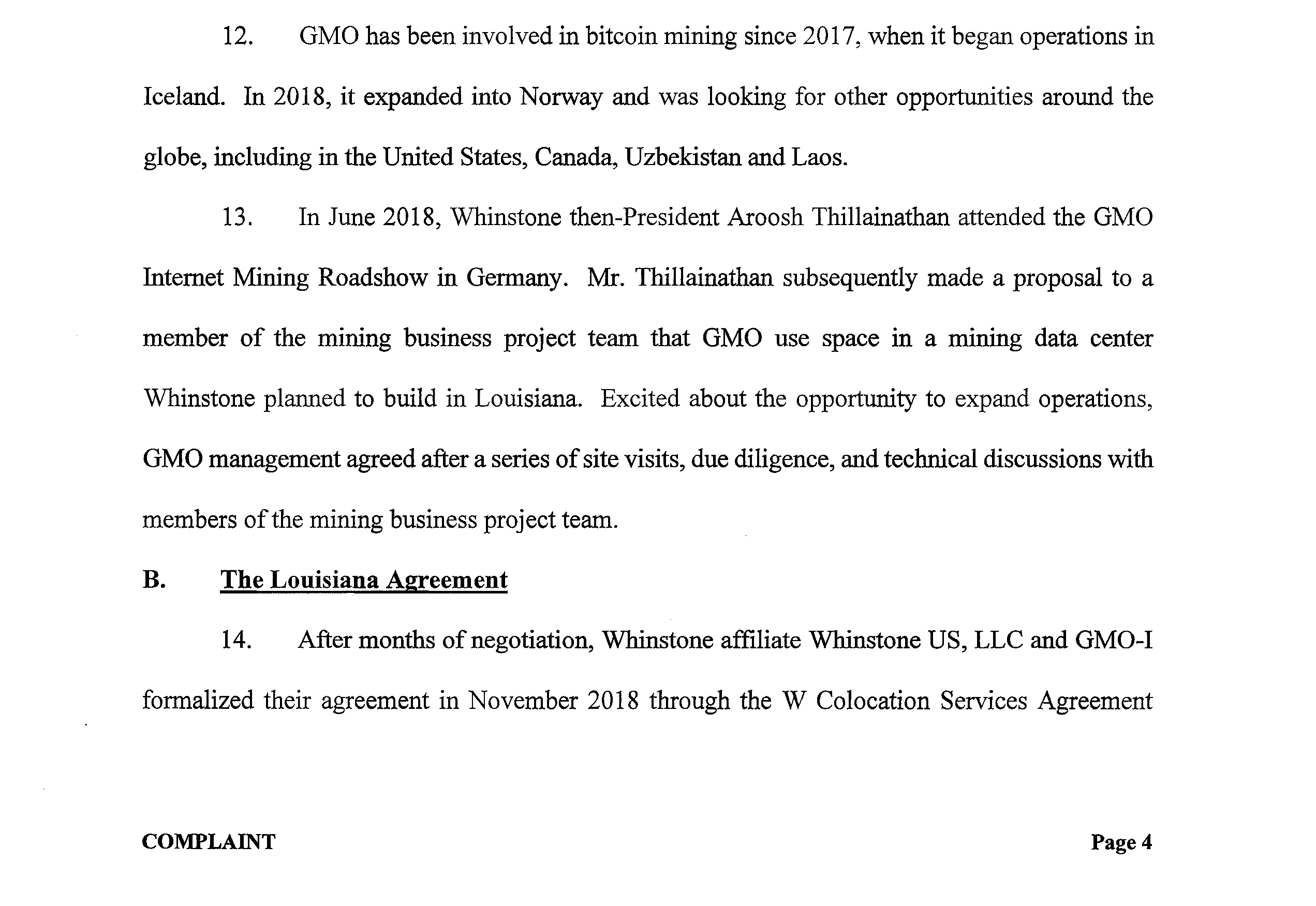 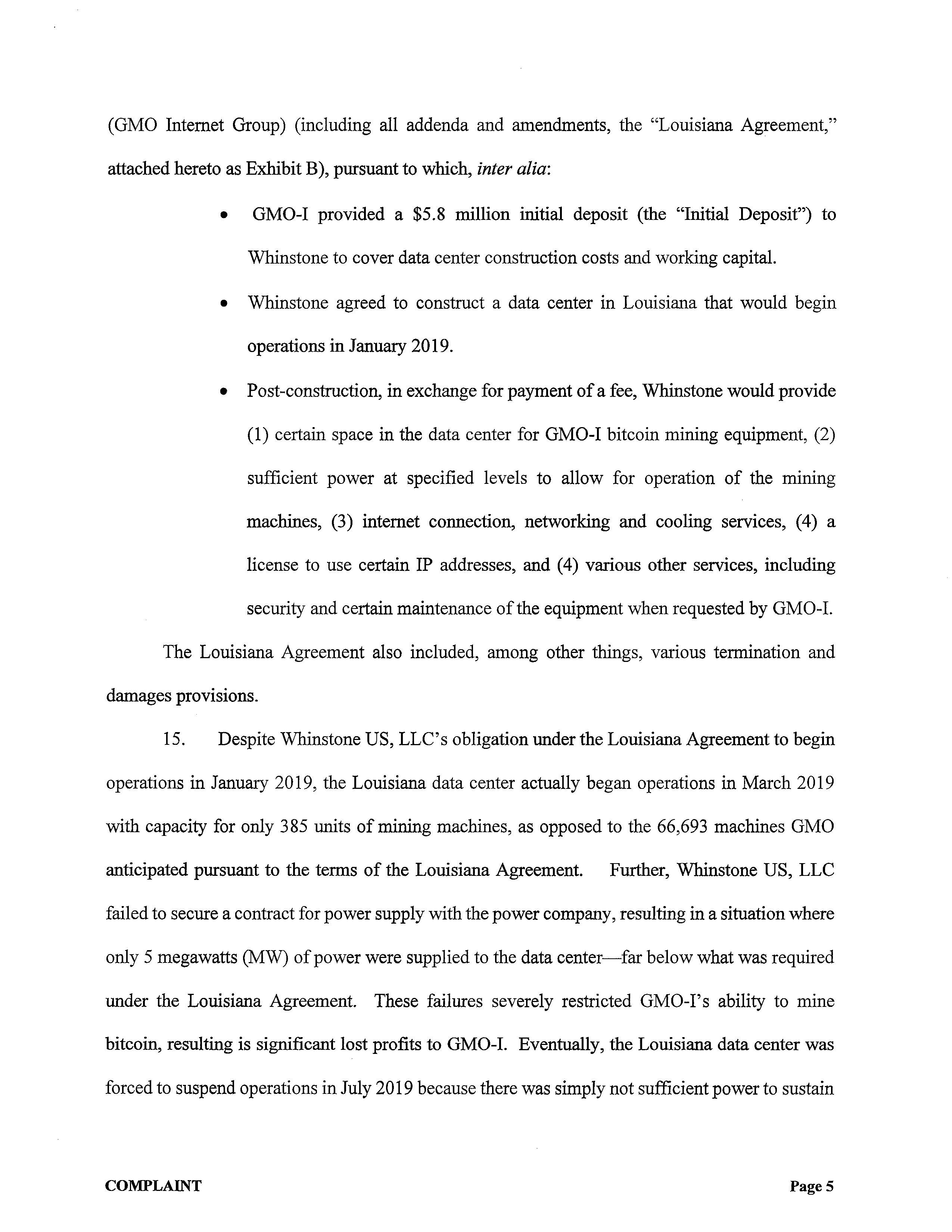 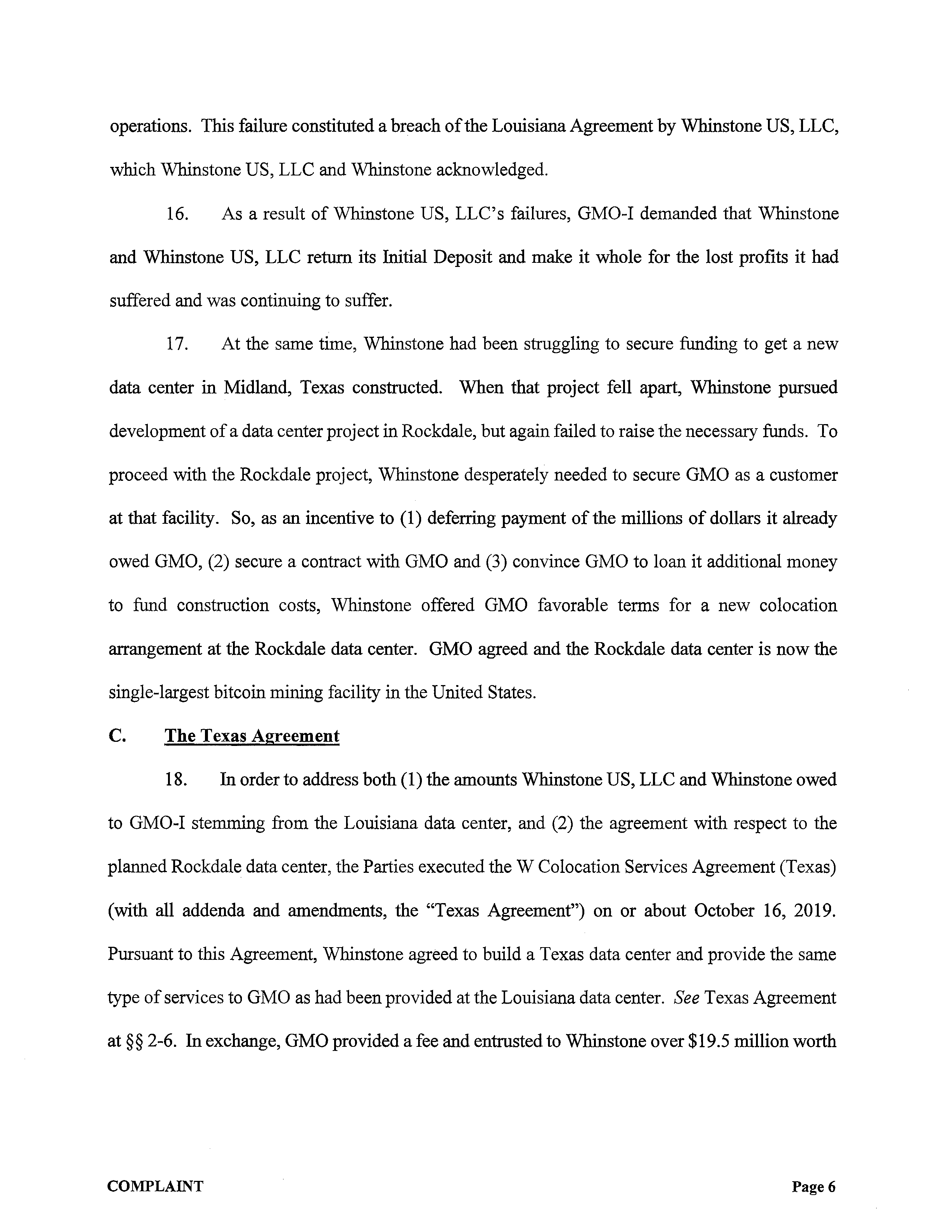 The suit pertains to a colocation agreement under which plaintiff GMO Gamecenter USA paid $5.8 million to Whinstone US for the construction and operation of a data center for mining bitcoin. The complaint alleges that the data center did not have enough power to sustain operations and only had capacity for 385 mining machines rather than the 66,693 machines required by the contract, severely restricting GMO’s ability to mine bitcoin.  The action was filed by Haynes & Boone. The case is 1:22-cv-05974, GMO Gamecenter USA Inc. et al v. Whinstone US Corp.