We became interested in AriseBank and it’s business model as a potential ICO investment.  It seems Jared Rice, Sr. and Stanley Ford were involved in Dynastack, Inc. which now has a defunct website and BitofGlory.com.
In doing our research we came across this, BitOfGlory – Scam – Jared Rice CEO Dynastack.
We also discovered this, Dynastack Inc. DBA Dynalyer Inc SCAM Artists: Jared Rice, Tony Caldevilla, Stanley Ford.

It appears that Lee Perkins who was listed as the CMO of AriseBank may well be Hoa Lee Perkins a real estate agent in the Dallas area who got into trouble for money laundering. You can learn more here, Real Estate Agent and Loan Officer Indicted for Money Laundering, Dallas.
“Real Estate Agent and Loan Officer Indicted for Money Laundering, Dallas, Texas On October 9, 2013, Hoa Lee Perkins and Briggette Ellis were indicted in the U.S. District Court for the Eastern District of Texas for conspiracy to commit money laundering. From December 2006 through November 2008, Perkins, a real estate agent; Ellis, a loan officer; and others were involved in an illegal property flipping scheme. Perkins would purchase homes in north Texas cities in her name or in her associate’s parents’ names at market value. The homes were then flipped using straw buyers with bogus appraisals reflecting much higher values. False notarized loan documents were submitted to lenders, and Perkins paid the down payment, which was not disclosed on HUD-1 forms. The loan proceeds were paid to Perkins through an entity she controlled, Manda Homes LLC. Perkins and her co-conspirators flipped 26 properties, resulting in fraudulent loans totaling over $8 million. All of the properties were foreclosed or sold by short sale. The scheme caused a loss of approximately $2,041,439 to Fannie Mae and $4,308,000 to Freddie Mac. This indictment resulted from a joint investigation with the FBI and IRS-CI.” Case No. 4:13-cr-00244
We can’t find a LinkedIn profile for her. Quite odd given that a Chief Marketing Officer would undoubtedly have a LinkedIn profile touting previous experience and universities attended.
UPDATE #1: LEE PERKINS HAS BEEN REMOVED FROM THE WEBSITE. This occurred a day or two after we speculated that Lee Perkins and Hoa Lee Perkins may be the same person.

There was this on the AriseBank website – “From her time at Goldman Sachs, to her enormous amount of financial experience from real estate to investment houses, Mrs. Perkins was an ideal fit at AriseBank and currently serves as our Vice President. Her extensive knowledge of what we call “The other side”, has been instrumental in the process of throwing out the old way of doing things and replacing it with the new. A very important part of the Arise family and someone who offers great leadership in many areas of the company.”
We find that blurb to be rich with irony.
JT CLOUGH IS NOW LISTED AS THE CMO. 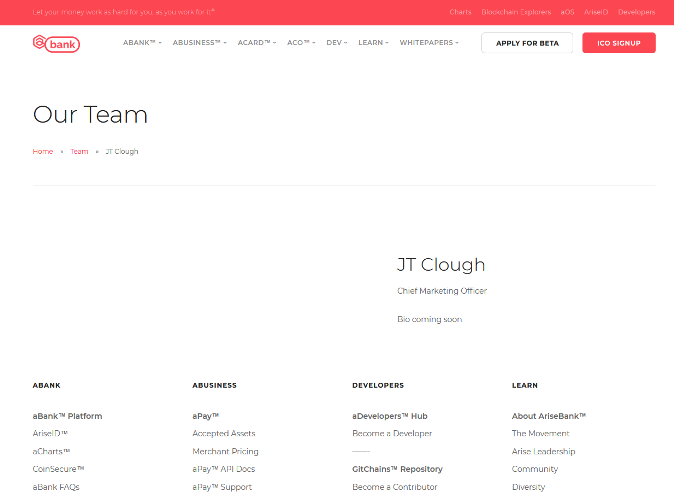 We have no idea how true any of this is but we do think it’s important to investigate the people behind ICO’s.  We all know investors are starving for some kind of a return on their money — and ICO’s can be a great vehicle for that — but not all ICO’s. Gotta believe AriseBank didn’t suddenly find God and banish (Hoa) Lee Perkins from the company.  We suspect she’s still involved.
Update #2: Below is a screenshot of the alleged money transfer by AriseBank the day the Texas Cease and Desist order was issued. Visit cryptofresh, here, to see the details of the money transfer.