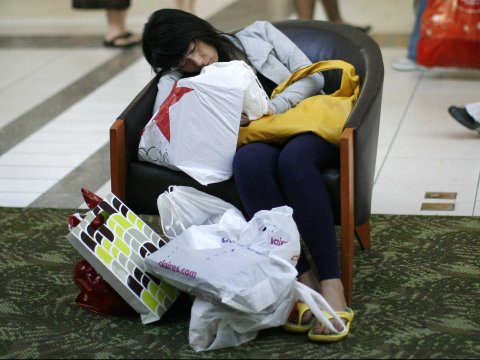 Yesterday, on eBay’s earnings conference call, CFO Bob Swan had some worrying  things to say about the outlook for U.S. consumer spending going into the  holiday shopping season.
“First, from a macro standpoint, Europe and [Asia-Pacific] — which  created a bit of anxiety for us in the first half of the year — have stabilized  through Q3,” said Swan during the call. “But at the same time, the U.S.  e-commerce softened considerably, [and] we have a cautious outlook for the  holiday season.”
During the Q&A, analysts pressed Swan on the outlook for fourth-quarter  consumer spending, resulting in the following exchange (emphasis added):
Ronald Josey III – JMP Securities: Just a real  quick, Bob, if you can go back and talk about the stabilization you saw in EU  and Korea and the impact in Marketplaces. I’m wondering is that just better  macro or the result of the marketing investments, I think, you made during the  quarter. Then also, domestically, any additional color as to why you think  holiday might be a little bit weaker this year would be helpful.
Bob Swan – SVP, Finance and CFO: Yeah, in terms  of Europe and Korea, as you may remember, back in July we had a bit of anxiety  just about the signs that we were seeing in both of those markets and how it was  impacting our business. During the course of the third quarter, in essence, we  looked at stable growth for 11%, Q2, 11%, Q3, and things kind of stabilized, and  what, at the time had caused us the greatest anxiety. I think there’re some  things that are working well in terms of what we’re doing and some things that  aren’t, but in the aggregate, we got nice fundamental strong businesses with  good stable growth. That’s kind of a first. Secondly, holiday week or –  the reality is the thing that’s caused the most angst is a dramatically  decelerating, what we believe is a dramatically decelerating U.S. ecommerce  growth rate from the second quarter of 15.5% to 16% from comScore to  the third quarter of closer to 13%. So when we came into the third quarter, we  looked at a stable U.S. market, and lo and behold, in a relatively short  period of time, we’ve seen a pretty rapid deceleration in the market. I  think for us, that deceleration happened throughout the course of the quarter.  Then, as always, we take all the information we have at our disposal, which  right now is roughly 15 days in, and we haven’t really seen any more  positive signs in October than what we experienced through the latter part of  the third quarter in the U.S. So all of that and all  of the anxiety we see when we pick up the newspaper every day, makes us fairly  cautious about how we look at the holiday season and it’s impacted our outlook  for the fourth quarter. I hope I’m too conservative. But right now, all the  signs point to a bit of caution.
Operator: Colin Sebastian, Robert W. Baird.
Colin Sebastian – Robert W. Baird: Maybe just one  quick follow-up there on the deceleration in the U.S. Bob, I wonder what your  level of confidence is on the Q4 outlook if there is no improvement in the U.S.  into the holiday period given overall stable growth rate expectations? My other  question would be on the new users coming from mobile. I think you’ve  articulated in the past that they don’t monetize quite as well as other users,  and I wonder though if you’re seeing a trend emerging among these cohorts is  their tenure on eBay and PayPal, it starts to lengthen if the monetization is  improving?
Bob Swan – SVP, Finance and CFO: I’ll do the  first, John, and maybe hand you the second. I think in terms of the decel that  we’re seeing in the quarter in level of confidence, we always try to – at the  risk of repeating myself, we always try to give you our best flip based on  everything that we are seeing. It’s hard to be really confident when  lots of the fundamentals that we’re reading about are not all that positive.  That being said, we’re not expecting really any improvement in the fourth  quarter from what we’ve experienced for the last eight to 10 weeks. So  we’re not expecting improvement. We’re just assuming that things are going to  stabilize where they are. Ecommerce growth rates will not accelerate, but they  will be stable. We think we’re well-positioned to deal with an environment that  doesn’t get any worse than it kind of is right now.
Today, eBay shares are down more than 3% on the company’s weak fourth  quarter guidance.
Read more:  http://www.businessinsider.com/ebay-warns-about-weak-holiday-shopping-2013-10#ixzz2i07TAIkg