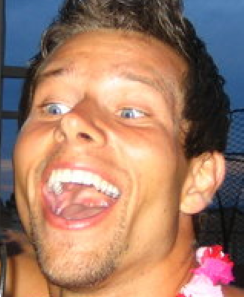 Petr Pacas, Peter Pacas, Pete Pacas, an employee of Adconion Direct, with Kim Reed Perell as CEO, has been charged with crimes by California Federal Prosecutors.  I wonder how his family feels about this.  Are they “stoked”?  There’s a reason they don’t put trailer hitches on Hearses.  None of us is taking anything with us other than the truth of who we are, the way we lived our lives, how we treated others, and whether we made the world a better place for having been in it.

The article below is reprinted from Krebs Security.
Federal prosecutors in California have filed criminal charges against four employees of Adconion Direct, an email advertising firm, alleging they unlawfully hijacked vast swaths of Internet addresses and used them in large-scale spam campaigns. KrebsOnSecurity has learned that the charges are likely just the opening salvo in a much larger, ongoing federal investigation into the company’s commercial email practices.

Prior to its acquisition, Adconion offered digital advertising solutions to some of the world’s biggest companies, including Adidas, AT&T, Fidelity, Honda, Kohl’s and T-Mobile. Amobee, the Redwood City, Calif. online ad firm that acquired Adconion in 2014, bills itself as the world’s leading independent advertising platform. The CEO of Amobee is Kim Perell, formerly CEO of Adconion.
In October 2018, prosecutors in the Southern District of California named four Adconion employees — Jacob Bychak, Mark Manoogian, Petr Pacas, and Mohammed Abdul Qayyum —  in a ten-count indictment on charges of conspiracy, wire fraud, and electronic mail fraud. All four men have pleaded not guilty to the charges, which stem from a grand jury indictment handed down in June 2017. 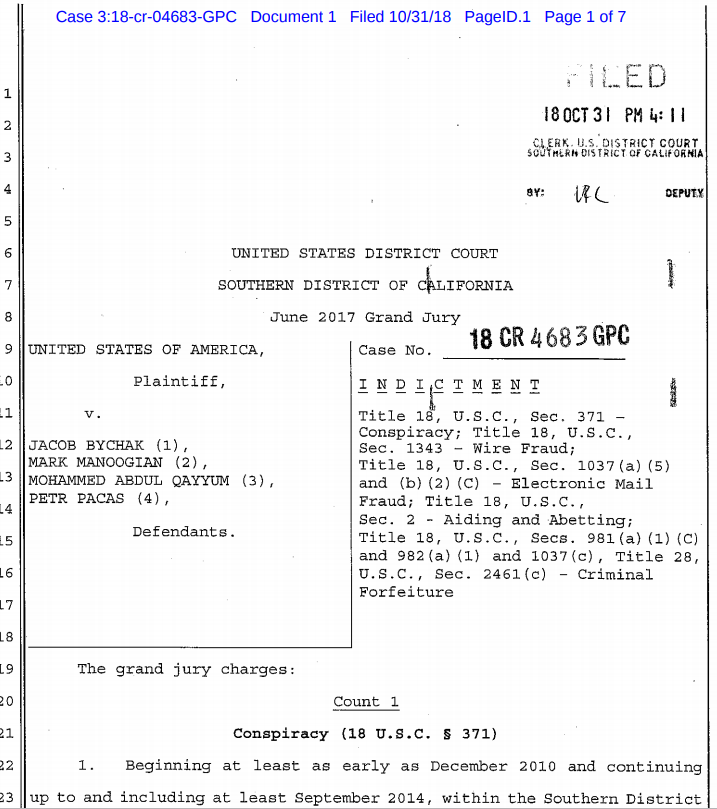 The indictment and other court filings in this case refer to the employer of the four men only as “Company A.” However, LinkedIn profiles under the names of three of the accused show they each work(ed) for Adconion and/or Amobee.
Mark Manoogian is an attorney whose LinkedIn profile states that he is director of legal and business affairs at Amobee, and formerly was senior business development manager at Adconion Direct; Bychak is listed as director of operations at Adconion Direct; Quayyum’s LinkedIn page lists him as manager of technical operations at Adconion. A statement of facts filed by the government indicates Petr Pacas was at one point director of operations at Company A (Adconion).
According to the indictment, between December 2010 and September 2014 the defendants engaged in a conspiracy to identify or pay to identify blocks of Internet Protocol (IP) addresses that were registered to others but which were otherwise inactive.
The government alleges the men sent forged letters to an Internet hosting firm claiming they had been authorized by the registrants of the inactive IP addresses to use that space for their own purposes.
“Members of the conspiracy would use the fraudulently acquired IP addresses to send commercial email (‘spam’) messages,” the government charged.

HOSTING IN THE WIND

Prosecutors say the accused were able to spam from the purloined IP address blocks after tricking the owner of Hostwinds, an Oklahoma-based Internet hosting firm, into routing the fraudulently obtained IP addresses on their behalf.
Hostwinds owner Peter Holden was the subject of a 2015 KrebsOnSecurity story titled, “Like Cutting Off a Limb to Save the Body,” which described how he’d initially built a lucrative business catering mainly to spammers, only to later have a change of heart and aggressively work to keep spammers off of his network.
That a case of such potential import for the digital marketing industry has escaped any media attention for so long is unusual but not surprising given what’s at stake for the companies involved and for the government’s ongoing investigations.
Adconion’s parent Amobee manages ad campaigns for some of the world’s top brands, and has every reason not to call attention to charges that some of its key employees may have been involved in criminal activity.
Meanwhile, prosecutors are busy following up on evidence supplied by several cooperating witnesses in this and a related grand jury investigation, including a confidential informant who received information from an Adconion employee about the company’s internal operations.

According to a memo jointly filed by the defendants, “this case spun off from a larger ongoing investigation into the commercial email practices of Company A.” Ironically, this memo appears to be the only one of several dozen documents related to the indictment that mentions Adconion by name (albeit only in a series of footnote references).
Prosecutors allege the four men bought hijacked IP address blocks from another man tied to this case who was charged separately. This individual, Daniel Dye, has a history of working with others to hijack IP addresses for use by spammers.
For many years, Dye was a system administrator for Optinrealbig, a Colorado company that relentlessly pimped all manner of junk email, from mortgage leads and adult-related services to counterfeit products and Viagra.
Optinrealbig’s CEO was the spam king Scott Richter, who later changed the name of the company to Media Breakaway after being successfully sued for spamming by AOL, Microsoft, MySpace, and the New York Attorney General Office, among others. In 2008, this author penned a column for The Washington Post detailing how Media Breakaway had hijacked tens of thousands of IP addresses from a defunct San Francisco company for use in its spamming operations.
Dye has been charged with violations of the CAN-SPAM Act. A review of the documents in his case suggest Dye accepted a guilty plea agreement in connection with the IP address thefts and is cooperating with the government’s ongoing investigation into Adconion’s email marketing practices, although the plea agreement itself remains under seal.
Lawyers for the four defendants in this case have asserted in court filings that the government’s confidential informant is an employee of Spamhaus.org, an organization that many Internet service providers around the world rely upon to help identify and block sources of malware and spam.
Interestingly, in 2014 Spamhaus was sued by Blackstar Media LLC, a bulk email marketing company and subsidiary of Adconion. Blackstar’s owners sued Spamhaus for defamation after Spamhaus included them at the top of its list of the Top 10 world’s worst spammers. Blackstar later dropped the lawsuit and agreed to paid Spamhaus’ legal costs.
Representatives for Spamhaus declined to comment for this story. Responding to questions about the indictment of Adconion employees, Amobee’s parent company SingTel referred comments to Amobee, which issued a brief statement saying, “Amobee has fully cooperated with the government’s investigation of this 2017 matter which pertains to alleged activities that occurred years prior to Amobee’s acquisition of the company.”

ONE OF THE LARGEST SPAMMERS IN HISTORY?

It appears the government has been investigating Adconion’s email practices since at least 2015, and possibly as early as 2013. The very first result in an online search for the words “Adconion” and “spam” returns a Microsoft Powerpoint document that was presented alongside this talk at an ARIN meeting in October 2016. ARIN stands for the American Registry for Internet Numbers, and it handles IP addresses allocations for entities in the United States, Canada and parts of the Caribbean.

As the screenshot above shows, that Powerpoint deck was originally named “Adconion – Arin,” but the file has since been renamed. That is, unless one downloads the file and looks at the metadata attached to it, which shows the original filename and that it was created in 2015 by someone at the U.S. Department of Justice.
Slide #8 in that Powerpoint document references a case example of an unnamed company (again, “Company A”), which the presenter said was “alleged to be one of the largest spammers in history,” that had hijacked “hundreds of thousands of IP addresses.” 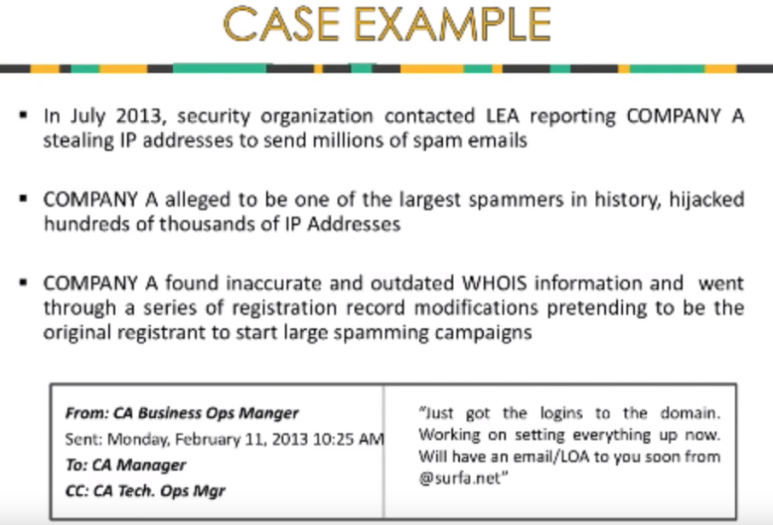 A slide from an ARIN presentation in 2016 that referenced Adconion.

There are fewer than four billion IPv4 addresses available for use, but the vast majority of them have already been allocated. In recent years, this global shortage has turned IP addresses into a commodity wherein each IP can fetch between $15-$25 on the open market.
The dearth of available IP addresses has created boom times for those engaged in the acquisition and sale of IP address blocks. It also has emboldened scammers and spammers who specialize in absconding with and spamming from dormant IP address blocks without permission from the rightful owners.
In May, KrebsOnSecurity broke the news that Amir Golestan — the owner of a prominent Charleston, S.C. tech company called Micfo LLC — had been indicted on criminal charges of fraudulently obtaining more than 735,000 IP addresses from ARIN and reselling the space to others.
KrebsOnSecurity has since learned that for several years prior to 2014, Adconion was one of Golestan’s biggest clients. More on that in an upcoming story.
We publish PSA’s based on publicly available information.
Find out more here —