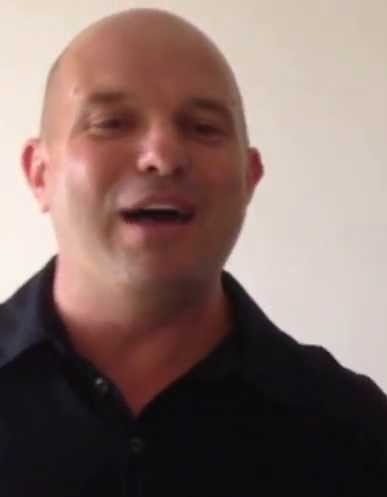 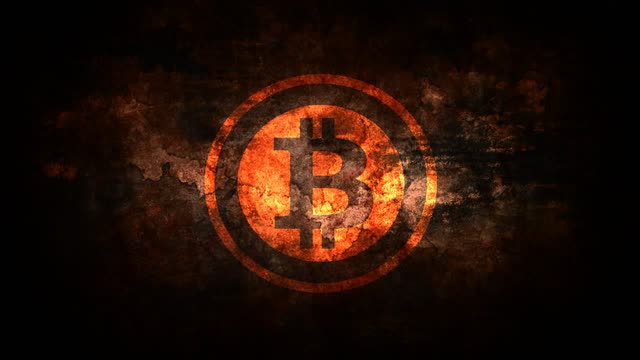 Investing is not about chasing every high-flying stock that is out there. Nor is it about betting on unloved and unpopular sectors in the hopes of miraculous comebacks. Investing, if you ask me, is about striking a balance between the story of a company and the numbers to see whether there’s an opportunity. Bitcoin has been on a tear over the last few months, and it seems as if we have time-traveled to December of 2017. Not so surprisingly, Riot Blockchain, Inc. (RIOT) is making waves again. First things first: I’m not a Bitcoin bull neither am I a Bitcoin bear. I may have little understanding about the technicalities involved in the cryptocurrency trade, but that is more than enough to conclude that Riot Blockchain is not the right way to bet on Bitcoin even if the cryptocurrency is headed toward new highs.

Riot has not always been Riot

The name Riot Blockchain makes it easy for anyone to understand what the company is about. Nobody wants things complicated, so investors usually take this in stride. When it comes to Riot, however, a little bit of history goes a long way in helping investors properly understand the company.

Here’s a timeline of how Riot Blockchain came into existence.

In 2000, a biotech company was founded under the name AspenBio and the company had a focus on developing human and animal antigens.

The company changes its name to AspenBio Pharma in 2005. Filing the relevant documents with the SEC, here’s what the company said at the time:

We are committed to turning Aspen into a dynamic growing company. The opportunity to enhance the reproduction efficiency of animals using our patented hormone technology is vast. Aspen is determined to become a recognized worldwide developer of patented new reproduction drugs and diagnostics for animals. By delivering on our prioritized near-term products we will thereby enhance the opportunity to expand the scope and breadth of our product portfolio introductions.

I’m not entirely sure as to the business model changes of the company, but AspenBio Pharma wanted another name change in 2012 which was duly approved by shareholders. AspenBio became Venaxis 8 years ago, and this is what the company had to say:

Our goal is to become a recognizable name in the human diagnostics space and we feel that the timing of these branding changes is auspicious, as we draw closer to commercializing APPY1 in Europe and initiating a pivotal clinical study for purposes of gaining regulatory clearance in the United States.

The company was on a roll. Venaxis acquired BiOptix in December of 2016 and obtained the required shareholder approval to change its name to BiOptix, Inc. This time around, the announcement sounded more technical in nature.

17 years after its inception, the company decides that developing pharmaceutical products is not what it wants to do. In a dramatic move, the company changes its name to Riot Blockchain in October of 2017 amid the heroic rise of Bitcoin. Then CEO Michael Beeghley told the press:

At Riot Blockchain, our team has the insight and network to effectively grow and develop blockchain assets. With new applications being developed for blockchain every day, this is a rapidly growing and evolving market. We are excited to have partnered with and led an investment in Coinsquare, a company we believe is well-positioned to capitalize on the opportunity in this sector.

The timing of this name change was perfect if you look at it from the perspective of existing shareholders. Bitcoin was finally becoming a mainstream investment vehicle, and Riot benefited from this enthusiasm. The stock immediately hit new highs, only to shed most of these gains when Bitcoin prices tumbled a few months later. 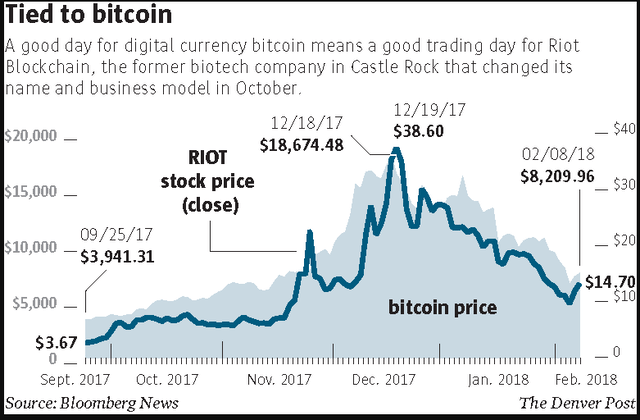 I can certainly understand if a company wants to change its name to reflect changes in the business model, but a company that has traded under 5 different names in just 20 years, without ever turning a profit under any of these names, raises my eyebrows. This, however, is not an investment thesis to divest or short-sell Riot Blockchain stock. The next step, therefore, is to evaluate the prospects for the company.

First, let’s look at the liquidity profile of the company. Back in 2018, some investors popularized the idea that Riot will eventually file for bankruptcy, which proved to be an inaccurate prediction. Even if the company incurs $12 million in operating cash outflows per annum, the current cash cushion of over $30 million will be sufficient to help the company keep its nose above the water for nearly 3 years assuming zero investments. Also, the company has zero long-term debt, and tapping the debt market is always an option. Not to mention the additional equity that could be issued to raise funds at today’s inflated market price. Taking all this into account, I don’t see the company being bankrupt in the near future, but this certainly is not a “buy” signal.

I believe the best way to understand the dynamics of investing in Riot is to look at gold miners. If you invest in gold the commodity, your profit would solely be determined by the purchase price, storage costs, and the eventual selling price. However, if you decide to invest in a gold mining company, the said company needs to account for all their operating costs and then turn up a profit for you to reap handsome rewards in the long run. In the short run, the stock price will move up or down based on the market price of gold but a lot of other factors need to be taken into account to identify multi-bagger opportunities. Things are no different in the Bitcoin trade as well.

As illustrated below, it’s an understatement to say that Riot is finding it difficult. Selling, General, and Administration expenses have consistently remained above revenue ever since the company transformed into a cryptocurrency miner in 2017, and this highlights the operating inefficiencies the company is faced with.

Let’s look at a hypothetical scenario which I categorize as the best-case scenario for Riot Blockchain.

The company plans to have 20,140 miners by June next year, and the majority is expected to be next-generation S19 Pro Antminers. At an electricity cost of just 0.05 USD per kWh, the company could turn an income of close to 300,000 per day assuming all the miners are S19 Pro Antminers. The gross profit would come to around $221,000 per day. I derived this figure by using the profitability calculator on niceHash and assumed Bitcoin/USD will remain stable at the current level. Based on 365 running days per year, the company will bring north of $80 million in revenue per annum (once again, I’m trying to see where the best-case scenario for Riot will take me). Even if SG&A expenses fall down to just 60% of revenue, which is a quite optimistic way to look at that, operating profit would come to approximately $32 million assuming no other operating expenses. Assuming no other expenses and an effective tax rate of just 10%, net income will total close to $29 million.

Based on 67.5 million shares outstanding, the EPS would come to around $0.43, assigning an earnings multiple of just over 20 times for the company at the current market price of $8.60. As a reminder, this is assuming everything will go to plan, but in hindsight, the company has so far failed to achieve its stated objectives for 20 years. To put things into perspective, Riot Blockchain might bring in about $29 million in profits per annum in the best-case scenario whereas the company is currently valued at a hefty $585 million. To add even more perspective, my model assumed Riot will mine more than 1200 Bitcoins every quarter, which is six times more than what the company is currently mining. 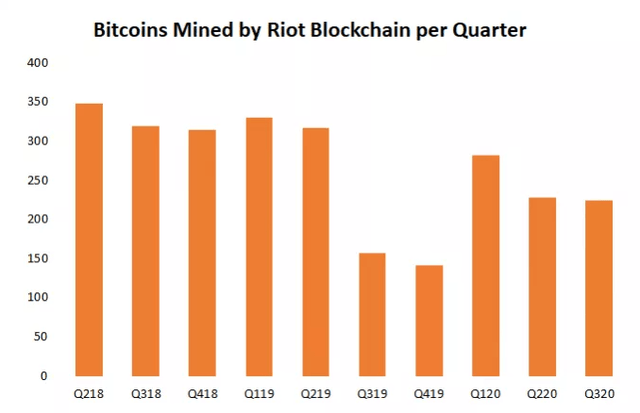 One argument is that Bitcoin prices could double from the current market price, in which case the profitability would more than double assuming SG&A expenses decline as a percentage of revenue. This, however, is an overly optimistic scenario and my model assumes the company to be significantly more efficient than it currently is. In addition, I project the company would do what it could not do for 20 years; stick to the stated objectives. After incorporating all these into the decision-making process, it’s fairly easy to see why Riot Blockchain is significantly overvalued at the current market price, regardless of what is happening with Bitcoin prices.

Riot Blockchain, as far as I see, does not have what it takes to be a profitable mining company. The best way to value the company is not to look at Bitcoin prices, but to determine how profitable the company could be at the current price levels. Even if Bitcoin continues to rise, I doubt Riot would ever turn up a profit because of the operating inefficiencies that are visible from the company earnings. For a Bitcoin bull, the best option would be to hold Bitcoin directly or to invest in a collective investment scheme such as Grayscale Bitcoin Trust (OTC:GBTC). Riot Blockchain stock is likely to crash in the near future, either due to a pullback in Bitcoin prices or because of a company-level adverse development such as the issuance of new stock at discounted prices. It seems to be a question of when not if.

If you enjoyed this article and wish to receive updates on my latest research, click “Follow” next to my name at the top of this article.

This article was written by

Author of Leads From Gurus

Actionable ideas and model portfolios to beat the market
http://beatbillions.com/

I am an investment professional with 7 years of experience in financial markets. I specialize in U.S. equities and incorporate a top-down approach to identify developing macro-level trends and the companies that would benefit from such trends. I am a strong believer that the best investment opportunities could be found in under-covered equities. Please click the “Follow” button to get timely updates on new articles.

I am the founder of Leads From Gurus, a Marketplace service on Seeking Alpha that focuses on uncovering alpha-generating opportunities.

I’m a CFA level 3 candidate, an Associate Member of the Chartered Institute for Securities and Investment (CISI, UK), and a candidate in the Chartered Wealth Manager program.

During my free time, I enjoy reading.

Disclosure: I/we have no positions in any stocks mentioned, and no plans to initiate any positions within the next 72 hours. I wrote this article myself, and it expresses my own opinions. I am not receiving compensation for it (other than from Seeking Alpha). I have no business relationship with any company whose stock is mentioned in this article.