When the merger of QVC and zulily is complete, m-commerce will account for about 50% of web sales. There’s still regulatory approval and a few other details to finalize, but QVC Inc. CEO Mike George already is thinking about the impact he believes the merger of QVC and zulily will have on the online retail market.
In his view the outcome is significant. “The combined companies have 1,000 merchants and I don’t know many retailers in the world that have 1,000 merchants,” George wrote in a recent update to employees contained in new regulatory filing with the U.S. Securities and Exchange Commission.

Liberty Interactive Corp., the parent company of TV and web retailer QVC, No. 15 in the Internet Retailer Top 500 Guide acquired zulily, No. 39 in the 2015 Top 500, on Aug. 17 for $2.4 billion.
The deal is still subject to regulatory review but is expected to close before the end of the year, QVC says. When the deal is complete the combined organization will have Internet Retailer-estimated annual e-commerce sales of $4.73 billion. Mobile commerce is projected to incorporate about 50%, or annual m-commerce sales of $2.36 billion. “Think about a combined $5 billion e-commerce business, making it the third- or fourth-largest e-commerce business in the U.S.,” George wrote in his letter to employees. “Think about a business that’s over 50% mobile, when the industry’s averaging 25% to 30% mobile.” 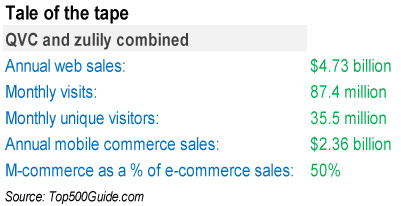 Zulily will be able to leverage QVC’s global assets, vendor relationships and video commerce experience, while QVC will benefit from zulily’s younger customer demographic, personalization expertise and e-commerce capabilities, George wrote employees. The combined company also will benefit from zulily’s flash-sale business model and a focus on niche and up-and-coming apparel vendors. “They use email and text and mobile apps as their engagement platform,” George wrote. “So every morning at 9 a.m. they sent out many, many, many millions of emails to their customers and their prospects, and these emails present these five or 10 thousand new items to the customers.”
The merged company will maintain separate organizations, and QVC has no immediate plans to consolidate Seattle-based zulily’s operating infrastructure or reduce the current number of employees. “We’re going to continue to operate as two separate brands, two separate organizations,” according to George’s letter. “The team in Seattle’s going to be driving the mission of zulily in Seattle and we’re going to continue to drive the mission of QVC.” QVC will remain headquartered in West Chester, Pa.
QVC, which generated e-commerce sales outside of the United States of $741.0 million in 2014, operates e-commerce sites in China, France, Germany, Italy, Japan and the United Kingdom. The company aims to make the combined zulily/QVC organization an even more substantial e-retailing global company, George wrote employees. “We have 19 million customers around the world and many more prospects,” George said in his letter. “We shipped 230 million items to customers in 85 countries last year.”
Zulily doesn’t break out international sales, but does ship orders to 80 countries, the company says.