‘The system is rigged, there is no such thing as meritocracy’

A woman who used to write college essays, applications, and resumes for the children of wealthy parents has spoken out about the college bribery scandal.

Jaimie Leigh took to Facebook to reveal that she was not at all surprised when she found out that dozens of affluent parents, including Hollywood celebrities like Lori Laughlin and Felicity Huffman, had bribed their children’s way into America’s top schools.

‘I think a lot of people seriously have no idea how thoroughly the system is rigged,’ she wrote. ‘There’s no such thing as meritocracy’. 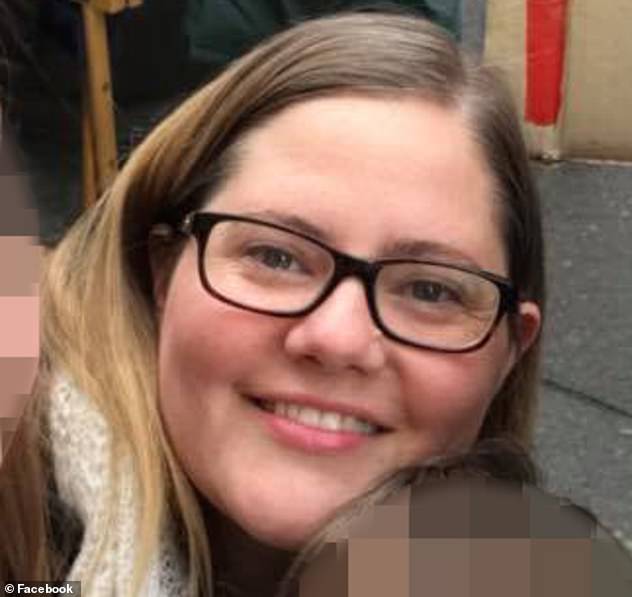 Writer Jaimie Leigh (pictured), who used to write the college essays, applications, and resumes for the children of wealthy parents has spoken out about the college bribery scandal

Leigh broke down just how essential it was for the wealthy to get their children into these elite schools, and how it set up their children for the same opulent lifestyle in her Facebook post

Leigh explained that she spent several years as a ‘for-hire writer who couldn’t afford to turn work away’.

‘This means I accepted a lot of jobs I feel icky about now, but it also means that I’ve seen firsthand how this all shakes out,’ she said.

Paying someone to write academic papers, while not seen as morally sound, is actually legal because it is treated as a paid transaction. Once the ghostwriter has completed the paper and is paid for it, the content becomes the property of their client.

Leigh then begins to tell the story of a person she names A*****e McGloaty Face III and how getting him into Harvard is ‘just the first domino en route to prestige and pedigree’.

‘The first domino starts the chain,’ she writes. ‘The richest of rich parents get him there by donating a library collection or buying a building.’

‘The middling rich, like those in today’s story, cheat (and don’t for a single second think the people indicted today are the only ones, because they are not, not, not).’

‘The lowly rich hire people like me to write their kids’ essays and letters, pull together their resumes, and figure out how to make years of abject mediocrity sound good.’ 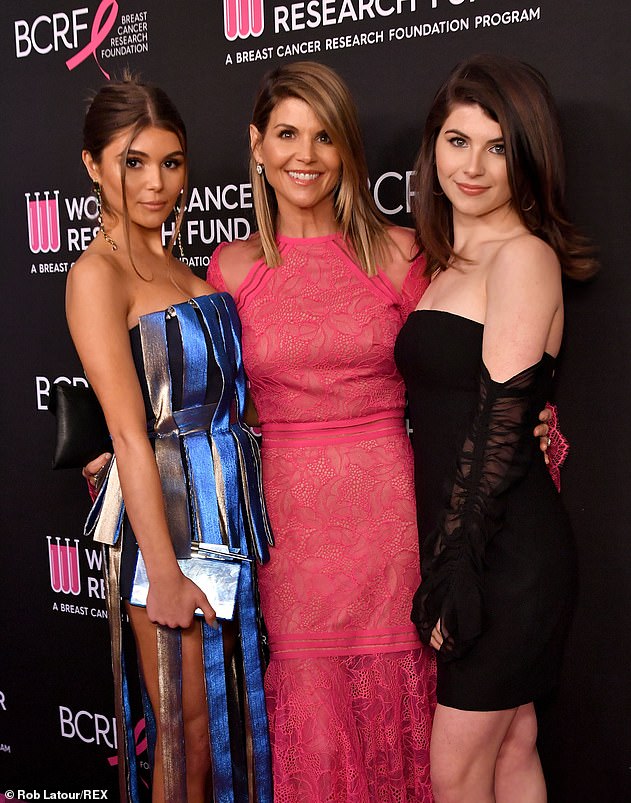 Leigh said she was not at all surprised when she found out that dozens of affluent parents, including Hollywood celebrities like Lori Laughlin and Felicity Huffman, had bribed their children’s way into America’s top schools. Pictured are Lori Loughlin, center, and her two daughters Olivia Jade, and Bella Giannulli

‘They pull strings to get their kids special accommodations they don’t need, so they have more time to get all the math problems done on the SAT,’ she continued. ‘They get interview coaches who teach their kids what to say when they go for their appointment.’

‘They lean on connections to get Harvard and Yale to take a “second look” at their C+ student with a 980 SAT score. These kids get a complete team, and the face A*****e McGloatyFace presents to the Ivy isn’t his own; it’s a composite of all the best expertise his parents’ money could buy.’

Leigh said these same parents hire her again even when their children gets into the top school. Now they need help with their classes.

‘Want to know how many papers I’ve written for undergraduate students? Graduate students? I couldn’t even tell you,’ she writes. ‘It’s a higher number than I can remember offhand. Need a magic paper to save your grade in the class you’re failing? Need to save your half-a***d thesis? I’ve done it all. I’m a better-than-average writer and I made my clients look good.’

Leigh said this all ensures that the student graduates with an Ivy degree, which then gets him internships and jobs at the best companies in the country.

‘It means he gets interviews, even if his GPA is sub-3.0. It means he gets the best jobs when he graduates. He’s still an idiot, but now he’s an idiot earning high-five or low-six figures,’ she writes. ‘This is when the next dominos start to fall.’

Leigh said the company that hires the student then begins to groom him with an executive coach, deciding that he’s ‘executive material’ because he has the ‘right name and the right degree and the right presentation’.

He will also get a mentor, who will help him ‘meet the right people, form the right connections’ and take him to the right events to make sure ‘he knows all the power players in their city’, she continues. 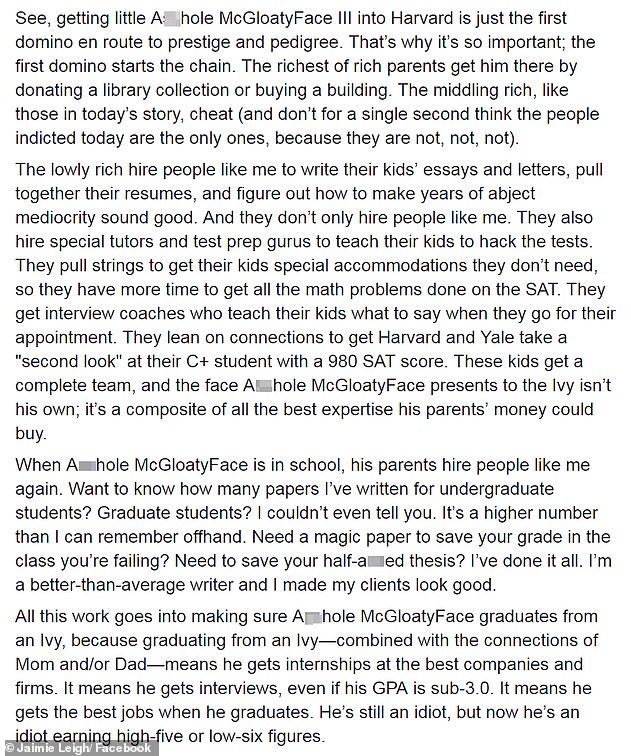 It is these key figures who help the student sign up for the right charities to build his ‘Personal Brand’, getting him seats on ‘the best non-profit boards in his city’.

‘Some of these are competitive,’ Leigh writes. ‘Want to know how I know that? Because they require an essay, resume, and bio. And guess who writes those.’

The student eventually gets promoted, making ‘low-mid six figures’. But thanks to his good school, good job, and good philanthropy, he begins being considered for ‘a whole host of things most average people have absolutely no awareness of’.

By the time he’s in his 40s and 50s and now earning high-six figures, the man is now ready to apply to a for-profit board, Leigh explains. 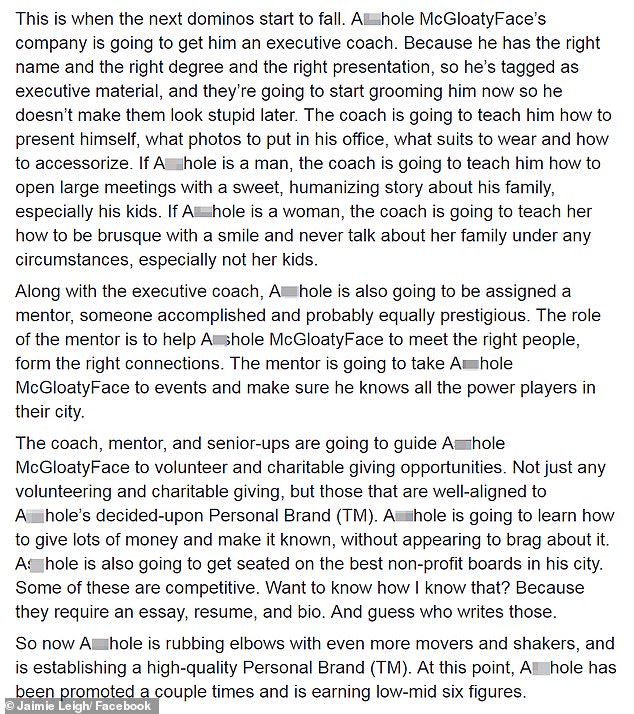 Leigh said this all ensures that the student graduates with an Ivy degree, which then gets him an internship at the best companies and firms in the country, which then work to turn him into executive material 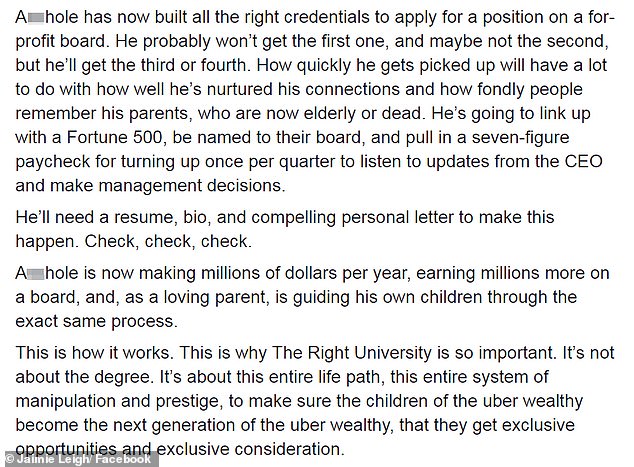 ‘He’s going to link up with a Fortune 500, be named to their board, and pull in a seven-figure paycheck for turning up once per quarter to listen to updates from the CEO and make management decisions,’ she writes.

Leigh revealed that she has taken jobs from 40-year-old men who still gave the phone to their fathers to ‘talk about how to craft the right impression in their adult child’s “personal” letter’.

‘A*****e is now making millions of dollars per year, earning millions more on a board, and, as a loving parent, is guiding his own children through the exact same process,’ she continued. 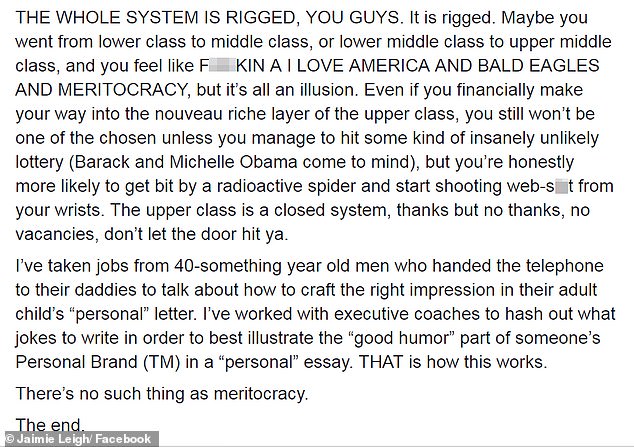 This, Leigh explains, is why the ‘Right University’ matters.

Leigh reveals it is these people who come out on top compared to those who are fighting for the same opportunities but don’t have access to the same resources.

‘Those people didn’t come from the right parents, or graduate from the right schools,’ she continues. ‘Their applications weren’t as good, because they wrote them themselves, and most people (sorry, y’all, but it’s true) do not write nearly as well as they think they do.’ 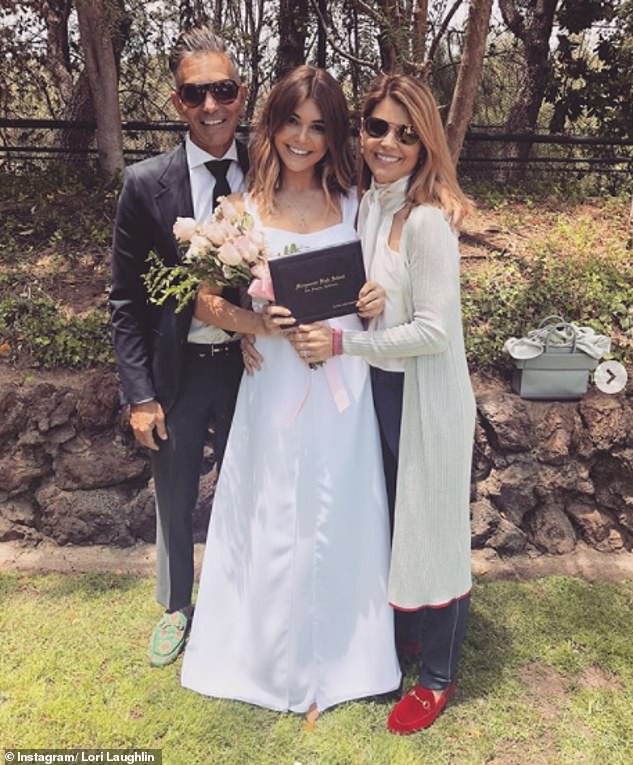 Loughlin and her fashion designer husband Giannulli allegedly paid $500,000 to get daughters Olivia Jade, 19, (pictured) and Isabella, 20, into the University of Southern California

‘Their bios weren’t as perfect, because they didn’t have executive coaches and mentors to help them establish a fine-tuned personal brand.’

‘The whole system is rigged, you guys. It is rigged. It’s all an illusion. The upper class is a closed system, thanks but no thanks, no vacancies, don’t let the door hit ya.’ 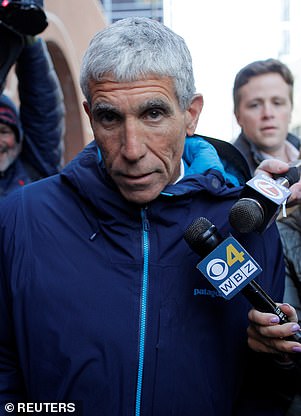 Rick Singer (pictured above) is the ‘mastermind’ behind the scheme. He cooperated with the FBI and is facing a maximum of 65 years behind bars

Loughlin, her husband Mossimo Giannulli, and Huffman were all charged with conspiracy to commit mail fraud and honest services mail fraud, a felony which carries a maximum sentence of five years behind bars, in the college bribery scandal.

William Rick Singer, the founder of Key Worldwide Foundation, had been identified as the alleged mastermind behind the scandal.

Charging documents claim that, since 2011, Singer has received $25million from parents to bribe individuals who could ‘designate their children as recruited athletes, or other favored admissions categories’.

Loughlin and Giannulli allegedly paid Singer $500,000 to get their daughters into USC by bribing the senior athletic director to designate them as crew recruits, despite the fact that neither girl participated in the sport.

Huffman allegedly paid $15,000 to arrange for someone to secretly change her daughter’s answers during the SAT exam.