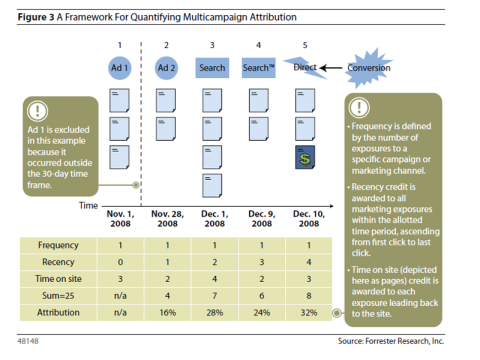 Is there a simple solution?
No. Not yet. Technology vendors such as ClearSaleing and TagMan provide a universal tracking code that can be dropped on to your site and will identify all your other marketing pixels with the same unique code so that the data matching can be done more efficiently. A tool like TagMan also manages your pixels away from the site, and so tag changes no longer need IT resources.
There are also ad serving tools that allow for path to conversion analysis. Both Atlas and Doubleclick have moved in this direction but theirs solution require all data to flow through their systems.
Agencies are currently or will eventually approach this from the dashboard perspective. Analytics teams will accept that clients have historical tagging place and work then to collect the data from those legacy systems for the purpose of mixing that data together for the purpose of  achieving a desired outcome with a degree of statistical confidence. The data can be presented through our online analytics system and then downloaded into an excel spreadsheet.
Akamai is a content distribution network working with busy websites and ad servers globally to ensure that end-users have a quick and positive experience. They already have a sites content running through their servers and are already placing their domain cookies so they could conceivably be seeing enough data to attribute across channels some day.
But again, right now, in my opinion, the sane course of action today, is the same course of action you took yesterday; optimize each channel to its fullest.
Please note that some of the information in this article came from reference material.