Is the job market for professionals unraveling?

LinkedIn Job Postings Plunge, “by far the Worst Month since January 2009”
by Wolf Richter
The jobs data in the US has recently taken a nasty spill. Last week it was an ugly jobs report from the Bureau of Labor Statistics. It could bounce off next month, and the current data could be revised higher, but we’re not seeing the signs of this sort of hiring momentum.
Instead, we’re confronted with a sharp and ongoing deterioration of a leading indicator of the labor market: temporary jobs. They rise and fall months ahead of the overall number of jobs. The sector peaked in December 2015 at 2.94 million. It shed 21,000 jobs in May, and 63,800 since December. This is also what happened in 2007 and 2000, at the eve of recessions [read… What Makes this Jobs Report so Truly Ugly?].
This week, it was the Fed’s very own Labor Market Conditions Index which dropped to the worst level since the Financial Crisis, a level to which it typically drops shortly before the onset of a recession – and shortly before employment gives way altogether. It still could bounce off as it had done in early 2003, but it better do so in a hurry: 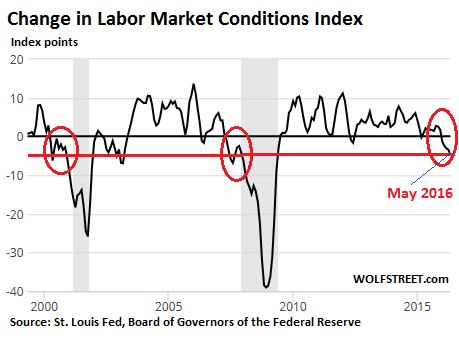 So now comes LinkedIn, or rather MKM Partners, an equity and economics research firm, with a report in Barron’s about LinkedIn – “While we like LinkedIn’s long-term prospects and believe that sentiment on the company’s opportunity is overly negative, we remain at Neutral on the stock,” it says. Rather than disputing the deterioration in the labor market or throwing some uplifting tidbits into the mix, the report highlights yet another 2009-type super-ugly data point.
LinkedIn has some, let’s say, issues. Its stock has gotten hammered, including a dizzying plunge in February. It’s now down over 50% from its high in February 2015. The company lost money in 2014, 2015, and in the first quarter 2016 despite soaring revenues. And that revenue growth may now be at risk.
But we aren’t concerned about the stock or the company. We’re concerned about that 2009-type super-ugly employment data point.
MKM Partners discussed that data point because it’s worried that investors might misconstrue it as weakness at LinkedIn, rather than what’s happening in the labor market and the overall economy:

We believe that LinkedIn is a unique network, the de facto in Recruiting with promising opportunities in Sales and Learning. We are concerned that the jobs tailwind over the past six-years is becoming a headwind and that any further softness in Hiring revenue would incorrectly be perceived as a TAM (total addressable market) issue vs. a macro issue.

The online jobs data is getting “incrementally worse,” the report explained (emphasis added):

After 73 consecutive months of year-over-year growth, online jobs postings have been in decline since February. May was by far the worst month since January 2009, down 285k from April and down 552k from a year ago.
Online job postings are not a direct revenue driver for LinkedIn. We do however believe it is a reflection of overall hiring activity and should be considered a check on demand vibrancy.

And the report frets that “further deterioration” could trigger a “revenue shortfall” in the second half.
LinkedIn caters to professionals, people with well-paid jobs, or people looking for well-paid jobs. They’re software developers, program managers, petroleum engineers, executives of all kinds, marketing professionals, sales gurus…. They span the entire gamut. And companies use LinkedIn to recruit those folks.
So with online job postings on LinkedIn plunging since February, and with May clocking in as “by far the worst month since January 2009,” then by the looks of it, businesses are slashing their recruiting efforts in those professional categories.
If that bears out, it would be another sign that not only the labor market but the overall US economy have taken a major hit recently, that businesses have started to respond to sales which have been falling since mid-2014 and to profits which have been falling since early 2015, and to productivity which declined in Q1 and has been weak for years – and that they’ve begun to look at their workforce for savings. And if this bears out, they will confront the possibility of a looming recession with even steeper cuts.
The evidence keeps piling up. In Texas, sales tax collections, a raw and unvarnished measure of the real economy, just experienced their worst plunge since the Financial Crisis. Read… Consumers in Texas Begin to React